Fiasp vs. Humalog: How do they differ? 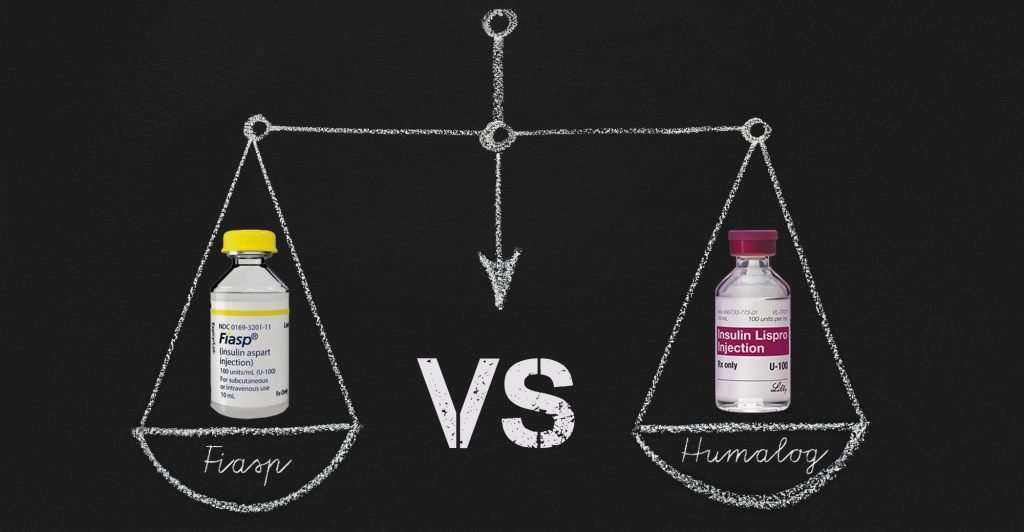 There are many diabetes treatments available on the market from insulin to insulin-like medications. In this article we will be comparing two the biggest names when it comes to insulin – Fiasp and Humalog.

Fiasp & Humalog are two common insulin medications taken by patients with type 1 & 2 diabetes. Both of these rapid-acting insulin’s mimic insulin that is produced in the body and taken to stabilize blood sugar levels.

Rapid-acting insulin is a class of insulin medication which start working after 15 minutes of injection according to The American Diabetes Association.

Fiasp Insulin by Novo Nordisk is within the aspart category and found to be slightly faster than other types of insulin such as Novolog and Humalog. It contains niacinamide as part of its formulation which causes monomors (single pieces of insulin) to travel quickly through the subcutaneous layer faster.

In fact Fiasp insulin’s rapid-acting can enter the blood stream within 2 minutes after injection and post-meal duration can last up to 4 hours.

Injection can be taken 20 minutes before eating or even 20 minutes after to reduce the post-meal spike which is unlike other types of insulin.

The CDE has described Fiasp as working “50 percent harder” during the first 30-60 minutes in comparison to Novalog, Apidra and Humalog.

Fiasp can also be taken with an insulin pump however you’re likely to find that it requires a reduction in your total daily insulin needs and basal insulin settings since it’s more rapid-acting.

Fiasp: Is right for you?

Despite all the amazing benefits Fiasp has to offer, it may not be the best option for you. Insulin medication is not a one-size fits all solution.

According to some diabetes experts, it may not be the right choice for low-carb meals since those meals digest slower.

Patients also need to take caution when transitioning to Fiasp from other insulin medications such as Humalog, Apidra and Novolog.

If patients are using it as their primary meal-time insulin, patients must consider what they are eating and time of dosing. Otherwise this fast-acting insulin can result in low blood sugars as a result.

Like most insulin’s available on the market, hypoglycemia is one of the potential side effects.

According to Novo Nordisk, reactions that have been reported may include (but not limited to):

While side effects might make someone reconsider taking Fiasp, most insulin’s on the market have similar side effects and these rarely ever happen. However, patients should be warned regardless.

The cost of Fiasp is typically the same as other insulin s such as Humalog and Novolog.

Depending on your insurance coverage you may be entitled to further savings. The NovoCare Patient Assistance Program is also available for those with a low household income.

Beware some insurance companies may only cover Humalog. If this is the case then you should get your doctor to send a letter to the insurance company to explain your unique need for this type of insulin.

Humalog (insulin lispro) is a mealtime prescription insulin that treats patients with type 1 or type 2 diabetes. It is classified as a rapid-acting insulin, as it begins working within 15 minutes of injection (as opposed to the normal 30).

Humalog is most often used in combination with a longer-lasting insulin to help maintain blood sugar in between meals, as the liver is always putting out some glucose. Humalog is manufactured and owned by Eli Lilly and Company, and was approved for use by the Food and Drug Administration in 1996. One cannot currently buy Humalog in a generic version.

Humalog is available in three varieties.

Many patients prefer the Humalog Mixes because they provide the ability to administer fewer injections throughout the day while still maintaining blood sugar levels between meals. Your doctor will know which variety is right for you. Patients can buy Humalog at any major pharmacy.

It is important to talk to your doctor about Humalog dosing and use. Do not stop taking insulin medication without talking to your doctor.

As with any medication, Humalog may have some side effects. These include (but are not limited to):

Talk to your doctor if you are experiencing any side effects.

Differences between Fiasp vs Humalog

There are some notable differences between these two insulin medications. More specifically in regards to their onset, peak and duration activity as shown in the table below.