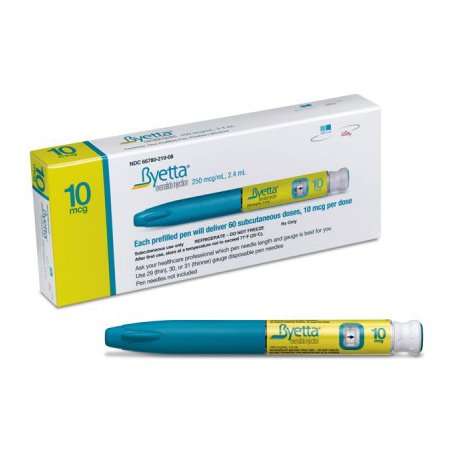 What is Byetta (exenatide)?

Byetta (exenatide) is brand-name injectable medication that is classified as an antidiabetic drug. It is used to treat symptoms associated with type 2 diabetes mellitus.

It contains exenatide that is considered an incretin mimetic. Incretins, such as human-glucagon-like peptide-1 (GLP-1) are hormones produced and released into the blood by the intestine after meals.

Studies have shown that GLP-1 reduces appetite and helps patients with weight loss.

Diet and exercise are usually recommended as part of treatment in order to improve glycemic control.

Byetta is currently not approved or considered safe for children.

Byetta is available as a prefilled pen that is injected subcutaneously (under the skin). Doses are typically taken before major meals during the day (i.e. breakfast and dinner).

It is typically prescribed by on its own or with other diabetes medications such as metformin, a sulfonylurea, or both to help lower your blood glucose levels.

Byetta has shown to significantly lower hemoglobin A1c (HbA1c) which measures average blood sugar levels over a period of 2-3 months.

In other studies that included other antidiabetic medications.

How is Byetta Used?

Before using Byetta, patients should read the Pen Manual and Medication Guide. Review medication preparation and usage instructions with your pharmacist. If you have any questions regarding this medication or why you are taking it, consult your doctor or pharmacist.

Inspect your medication for any discoloration or particles. If either are visible do not use.

Prior to injection clean the area with a cotton swab and rubbing alcohol. Rotate the injection site to avoid any skin complications.

Byetta should be injected twice per day in the upper thigh, upper arm or abdomen as instructed by your doctor, nurse or diabetes practitioner.

It is recommended to administer medication 1 hour before meals (not after meals as it may not work as well), at least 6 hours apart and before the two main meals of the day. .

If you are also using insulin, separate your injections and do not mix them together. Avoid injecting both medications into the same spot.

Consult your doctor about any medications, over-the-counter-drugs or supplements you are taking so they can create a regimen for your drugs to avoid interactions.

Your dosage of Byetta is based on your existing medical condition and how your body responds to the treatment. Try to schedule your injections at the same time every day and follow your doctors diabetes treatment plan, diet and exercise recommendations if provided. Set reminders for injections in your smartphone to avoid missing doses.

The typical starting dose for Byetta is 5 µg (micrograms) and maximum dose is 10 µg twice daily.

How to store Byetta

Pen needles are not included with the pen and must be purchased separately. Pharmacists should advise the correct needle length and gauge to be used.

Do not share your pen with others, even if the needle has been changed as this can lead to spreading infections or blood-borne pathogens.

Do not inject this medication if it contains particles; appears colored or cloudy.

If you skip a dose or miss a dose, continue with your regular dosing schedule. Never take a double dose if you have missed one.

Inform your doctor if you have any significant issues with your health or medical history such as kidney disease, stomach/intestinal disorders (such as digestion problems, gastroparesis), disease of the pancreas (pancreatitis), certain blood disorder from exenatide (drug-induced thrombocytopenia) or stones in your gallbladder (gallstones).

Some patients may experience symptoms such as dizziness or drowsiness, headache, blurred vision which maybe the result of extremely low or high blood sugar. Do not drive or operate heavy machinery unless it’s clear you can do so safely..

Fever, stress, injury, surgery or infection can affect blood sugar levels. Inform your doctor if you experience any of these as it may require closely monitoring glycemic levels and adjusting treatment.

Inform your doctor of other prescription medications, over-the-counter drugs or herbal supplements you are currently taking.

Whether medication travels through breast milk is currently unknown and unlikely to harm an infant. Consult your doctor if you plan on breastfeeding. In animal studies, exenatide was present in breast milk of lactating mice however this is not conclusive with humans.

Byetta has been associated with fatal and non-fatal acute pancreatitis. Be aware of symptoms such as severe stomach pain or vomiting. If pancreatitis is suspect your doctor immediately discontinue Byetta and choose alter treatment.

The dose of insulin should be evaluated if used together with Byetta.

Some reports have shown altered renal function including renal impairment, increased serum creatinine, acute renal failure, sometimes requiring hemodialysis or kidney transplantation. Diarrhea, vomiting and nausea are symptoms that have occurred in some patients. Byetta is not suggested for patients who have severe renal impairment.

Byetta has not been studied and is not recommended with patients with serious gastrointestinal disease including gastroparesis. This is due to side effects users may experience such as diarrhea, nausea and vomiting.

Some patients treated with Byetta have experienced serious hypersensitivity (i.e. angioedema and anaphylaxis). If patients experience these reactions they must discontinue use and consult their doctor.

The safety and effectiveness of using Byetta has not been established in children and adolescents under the age of 18.

Seniors may be more sensitive to this medication and likely to experience side effects.

Byetta may increase your heart rate and how electrical impulses travel through the heart. If you currently have heart complications such as angina, a recent heart attack, heart failure or abnormal heart rhythm (i.e. rapid heart rate or heart block) inform your doctor immediately to see what may be required for management, if special monitoring is required or if any modifications need to be made to your treatment.

What drugs may interfere with Byetta?

Inform your doctor or pharmacist if you are taking any of these medications. Your doctor may decide to make the following changes depending on your circumstances.

Inform your doctor if you are taking any additional medications, over-the-counter drugs, vitamins or supplements. This should also include caffeine, nicotine, alcohol and street drugs as they may also interact with your treatment.

As with most medications, Byetta can have side effects that can range from mild to severe.

The following information below consists of side effects that may occur however does not include all possible side effects.

Speak to your doctor or pharmacist about the possible side effects and best practices to manage them if they become bothersome.

Common Side Effects with Byetta can include:

Mild side effects can be managed and typically go away within a few days or weeks. Speak to your doctor if they do not go away or become bothersome.

Serious side effects can include:

Acute pancreatitis (inflammation of the pancreas). Symptoms include:

Problems with kidney function (including kidney failure). Symptoms can include

Low platelet level. Symptoms can include:

Serious side effects aren’t common but can occur. Contact your doctor immediately if you are experiencing any severe side effects or call 911 for medical emergency if you feel they are life threatening.

The following information below details side effects related to Byetta in greater detail.

Some people may allergic to some of the ingredients contained in Byetta. Mild allergy symptoms can include:

Although rare, severe allergic reactions are possible. Symptoms can include:

Contact your doctor if symptoms from a severe allergic reaction do not go away. If you feel symptoms are life-threatening, call 911 for immediate medical emergency.

While taking Byetta, patients may experience a drop in blood sugar levels. This is referred to as hypoglycemia (or hypo for short). This occurrence is more likely if you are taking other drugs with Byetta, specifically insulin and sulfonylurea drugs such as gliclazide.

5.2% of people using Byetta experienced hypoglycemia during a clinical trial. Subjects were given 5mcg of Byetta twice daily for the 24-week trial. Of those given the placebo (not an active drug), hypoglycemia occurred in 1.3% of them.

Symptoms of hypoglycemia can include:

Pancreatitis (inflammation of the pancreas) – this wasn’t experienced by anyone in clinical trials but there have been a few reported cases, some serious or fatal, since the drug was released into the market in 2005. If you experience any symptoms of acute pancreatitis contact your doctor or seek medical attention immediately.

Symptoms of pancreatitis can include:

Speak with your doctor about what to do if you experience symptoms of hypoglycemia.

Patients using Byetta are unlikely to gain weight however may lose weight since it reduces appetite.

In a 24-week clinical study, people using Byetta only lose an average of 6.-6.4 pounds. In comparison, those taking a placebo only lost 3.3 pounds over the same time period.

In a 30-week clinical study, those who used Byetta with metaformin lost 2.9-5.7 pounds compared to those who were receiving a placebo who lost an average of 0.4 pounds.

In a 30-week clinical study, patients who were given Byetta with sulfonylurea lost 2.4-3.5 pounds compared to those who received the placebo who lost an average of 1.8 pounds.

Beytta is not a weight loss and shouldn’t be taken for that purpose however 1-2% of people have reported a loss of appetite.

Some patients have experienced nausea when first starting Byetta which why most people start with a low dose.

These symptoms tend to go away over time. Speak to your doctor if feeling of nausea and vomiting are still being experienced after a few weeks, especially since these can also be symptoms of acute pancreatitis.

Hair Loss has been reported after Byetta was approved however in clinical studies it was not reported. Speak to your doctor if you are concerned about hair loss prior to treatment with Byetta.

Consult your doctor or pharmacist if you experience diarrhea while using Byetta so they can provide ways to better manage it. To avoid getting dehydrated, drink plenty of fluids. If diarrhea is severe and not going away inform your doctor.

How is Byetta used?

Each dose should be administered subcutaneously (under the skin) in the upper arm, upper thigh or abdomen within 60 minutes of starting meals. Typically it is administered before major meals such as breakfast or dinner. It should not be administered after a meal as it may not be as effective. Dosages should be taken at least 6 hours apart. If patients miss a dose they should resume treatment as prescribed with their next schedule dose.

What forms does Byetta come in?

Who should not take Byetta?

Patients should not take this Byetta if they:

What to do if you overdose on Byetta?

If patients overdose on Byetta and are experiencing symptoms such as loss of consciousness or difficulty breathing, they should call 911 for emergency assistance or call the poison control center at 1-800-222-1222.