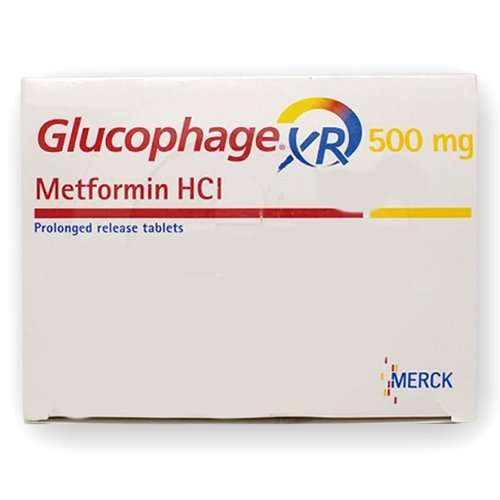 WHAT IS GLUCOPHAGE XR?

Glucophage XR is a biguanide that contains metformin hydrochloride. It is a prescription medication used in addition to diet and exercise to improve glucose control in adults with type II diabetes mellitus (T2DM). Controlling hyperglycemia prevents downstream complications such as kidney damage, loss of limbs, blindness, heart attack, stroke, or nerve problems. It is important that diabetes remains controlled to lessen the chance of related complications. Glucophage XR is not recommended for the treatment of type I diabetes or for patients with diabetic ketoacidosis.

HOW DOES GLUCOPHAGE XR WORK?

There have been multiple reports of lactic acidosis with metformin use, with some being fatal cases. Onset was typically gradual with symptoms including muscle pain, abdominal pain, drowsiness, and respiratory distress. More severe cases of acidosis included symptoms such as hypothermia, hypotension, and bradyarrhythmias. The signs and symptoms were accompanied by increased blood lactate concentrations, anion gap acidosis, and an elevated lactate/pyruvate ratio. There are multiple risk factors that increase an individual’s chance of developing lactic acidosis while on metformin. Risk factors and subsequent risk reduction measures include:

Studies have shown a decrease in vitamin B12 levels with the use of metformin. Monitor hematologic measures annually and vitamin B12 parameters every 2 to 3 years for patients taking Glucophage XR. If abnormalities are present, manage appropriately with Glucophage XR discontinuation or vitamin B12 supplementation.

Glucophage XR can cause hypoglycemia when used in combination with other products that lower blood glucose, such as insulin. Dose adjustments to insulin may be required to prevent development of hypoglycemia.

Decreased macrovascular risk with Glucophage XR has not been proven in any clinical studies.

Carbonic anhydrase inhibitors can lower serum bicarbonate and cause non-anion gap metabolic acidosis. When used concomitantly with Glucophage XR, this combination can elevate an individual’s risk for developing lactic acidosis. Patients that are taking these drugs in combination should be frequently monitored. Examples of CAIs include topiramate and acetazolamide.

Drugs that Decrease Clearance of Metformin

When used in combination with other drugs that can cause hypoglycemia, the risk for developing hypoglycemia with Glucophage XR is increased. Patients should be monitored for signs of hypoglycemia when on concomitant glucose-altering agents such as steroids, diuretics, and phenytoin.

How should I take Glucophage XR?

The dose of Glucophage XR will be different for different patients. Take Glucophage XR exactly as your doctor tells you to take it. Typically, Glucophage XR is taken once daily by mouth. Swallow tablets whole and never crush, chew, or cut tablets.

Do I need to take Glucophage XR with food?

Glucophage XR should be taken with meals, preferably with an evening meal. This helps to decrease potential stomach or bowel side effects that may occur after initiating Glucophage XR.

If you take too much Glucophage XR, you should immediately go to the emergency room or contact the Poison Control Center.

Avoid excessive alcohol intake, as this increases one’s risk of developing lactic acidosis while on Glucophage XR. Do not binge drink in short periods, and you should not drink a lot of alcohol on a normal basis.

What side effects may occur when taking Glucophage XR

Common side effects of Glucophage XR include:

Serious side effects of Glucophage XR include lactic acidosis. Contact your provider immediately if you have signs and symptoms of lactic acidosis, such as:

What is important to tell my doctor before I take Glucophage XR?

It is important that you tell your doctor all of the medications, vitamins, and supplements that you take. Maintain a medication list to give to your healthcare provider and pharmacist every time you get a new medicine. This is important because Glucophage XR may influence how other medicines work, and other medicines influence how Glucophage XR works.

Can Glucophage XR be used in children?

How and where should I store Glucophage XR?

Store Glucophage XR at room temperature between 68°F to 77°F (20°C to 25°C). Glucophage XR should be kept out of reach from children. Do not hold on to expired medicine or medicine that you no longer need. Ask your doctor how you should dispose of any Glucophage XR you do not use.