Insulin and medication pens are very common in the world of diabetes. Pens provide a simple, quick, safe, and discrete way of administering insulin and injectable medication and avoid the multiple and delicate tasks involved in using a standard vial and syringe.  Many pens come in a disposable format which simplifies the process by removing additional steps of refilling the pen. Currently almost all insulins and all injectable diabetes medications come in pens.  This article will provide information on the pros and cons of insulin pens, common characteristics of the pens currently available on the market, how the medication (non-insulin) pens work, and finally considerations regarding the glucagon pen.

Benefits of Using an Insulin Pen:

In 2018, Diabetes Care reported that a slight majority of the 7.4 million Americans on insulin chose vials and syringes to inject insulin.  The Health Care Cost Institute went further to state that vials made up 53 percent usage while prefilled insulin pens were used by 46 percent.  Reusable pens with cartridges made up less than 1 percent annually.  An additional study published in the Journal of Clinical Medicine in January 2016 estimated that 350,000 Americans used an insulin pump. Unlike the U.S., pens are widely used by Europeans with percent use at 80% according to a review published by The International Journal of Pharmaceutical Investigation in their January to March 2016 issue.

Different pens are compatible with different types of insulin. Some can hold larger doses.  Some pens provide 1-unit increments, others ½ unit. Some have added features like the pairing with a smartphone to calculate insulin doses among other attributes. The chart below identifies the company, the pen(s) it makes, the name of the insulin, the total insulin capacity of the pen, whether it is disposable or refillable, and lastly, features.  When selecting an insulin and pen type, and for precise dosing, seek the advice of your physician or diabetes educator.

Single Insulins and in Combination

Currently the only medication/insulin combination pen is Soliqua.

The injectable medications have many functions and work on the pancreas, liver, stomach, and intestine all with the goal of normalizing blood glucose levels in the body. The chart below identifies each injectable medication, it’s function(s), and how often it is taken.  For precise dosing seek the advice of your physician or diabetes educator.  Side effects can be viewed on the prescription insert or can be ascertained through your diabetes care team including your pharmacist.

Glucagon is a natural hormone produced in the pancreas that stimulates the liver to release stored glucose into the bloodstream when blood glucose levels are becoming too low. It is used if a person is experiencing very severe hypoglycemia. Glucagon can be obtained in a kit format containing 1 vial/dose of glucagon powder and 1 disposable syringe with sterile water for reconstitution.  It should be used immediately after mixing. Glucagon can also be obtained as a premixed autoinjector pen.

Low blood glucose levels begin at 70 mg/dL.  Often a person with diabetes can self-treat at this point.  As blood glucose levels drop further the person may exhibit confusion, irritability, sweating, and trembling.  As blood glucose levels drop to 50 mg/dL the person may be unable to eat or drink, experience disorientation, seizures, and loss of consciousness.  During this period a person would require treatment by another individual and the administration of glucagon will be needed. Glucagon should be always kept on hand and family; friends and co-workers should be aware of where the glucagon is stored and should be instructed in its use. 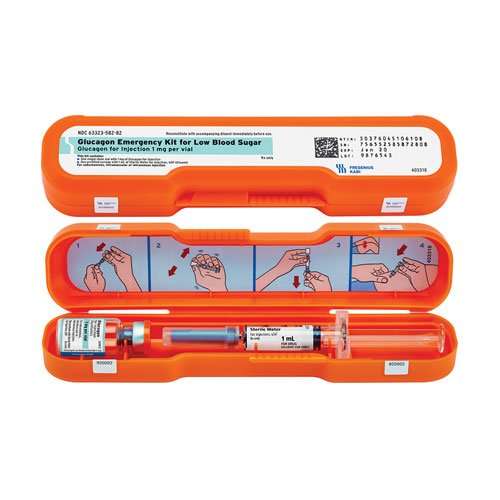 It should be kept at room temperature and not in the refrigerator.  It is important to keep glucagon in its original package and out of sunlight. The glucagon pen/kit contains only one dose. After administering glucagon, the first time the caregiver should immediately call emergency assistance.  Another dose can be administered after 15 minutes if the person remains unresponsive.  The injection is given under the skin. Several glucagon kits should be obtained, one for home and at least one for place of work.