What Organ in The Human Body Produces Insulin?

What is the Pancreas?

The pancreas is a (15~20)-cm-long tubular digestive gland, also called pancreatic gland, which is located across the back of the abdomen, just behind and below the stomach.

The pancreas has two main functions: 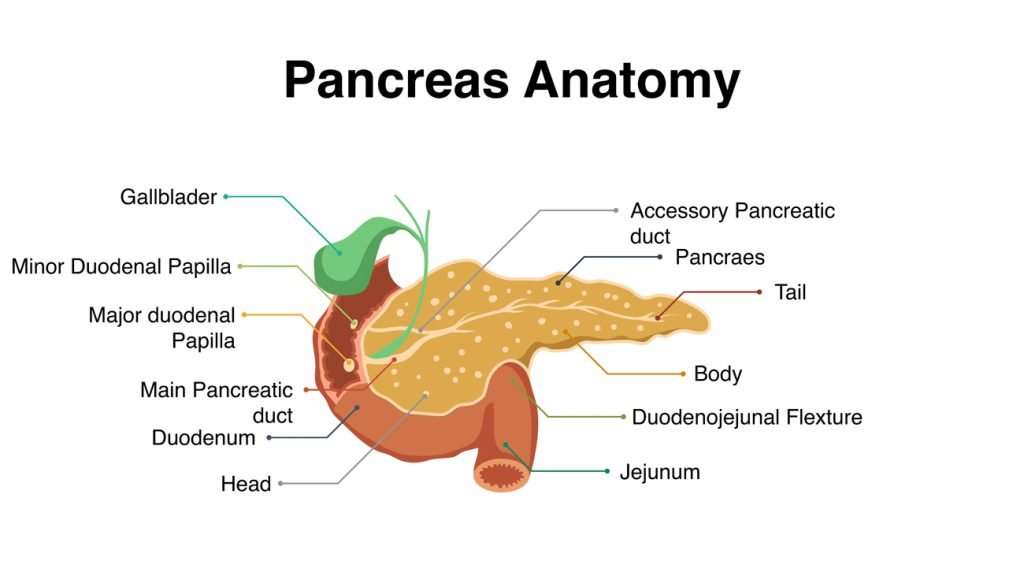 The product of pancreas exocrine cells is the pancreatic juice, that is a clear, alkaline (pH 7.8-8.4) liquid of 1-2 L/d containing digestive enzymes, which can help the intestine to break down the food for nutrient absorption.

Protective functions of the pancreas: The pancreatic juice contains bicarbonate (alkaline) that can neutralize acidic liquid coming from stomach, so that it protects the intestinal mucosa to avoid erosion.

Digest foods for nutrient absorption: The pancreatic juice has digestive enzymes to break down the food and nutrients, such as protein, fat, starch, which are the three major nutrient material.

The above-mentioned functions of pancreas are both the exocrine function associated with intestinal digestion. In addition, the pancreas has another function – endocrine function, that regulates the blood sugar connected with glucose metabolism, as follow:

If the pancreatic function and/or tissues and cells are damaged, that will cause:

Insulin is a hormone which is released by Islet B cells of pancreas, and enter the blood. That promotes anabolic metabolism and has profound effects on body growth and energy storage, i.e. store sugar and fat to perform some useful operation at a later time.

Glucose metabolism: Insulin ensures that glucose can be absorbed in the body’s cells to facilitate cells uptake of glucose. Glucose is the fuel for the cells, and you get the energy in this way to work. In addition, reduce the amount of circulating glucose in the blood, so blood sugar will be lower. The higher the blood we have, the more insulin is produced, so that the concentration of glucose should not rise too much. Having high blood sugar over a long time is harmful for the body and this is an illness called diabetes. If lack of insulin, it will elevate the level of blood sugar, so as to cause diabetes mellitus. Taking hypoglycemic agents and/or supplying insulin can control the disease. However, the excessive use of drugs will cause low blood sugar.

Fat metabolism: Insulin can promote the formation and storage of fat, and inhibit breakdown of fat into the blood. If lack of insulin, it will cause hyperlipidemia (high blood fat), arteriosclerosis (hardening of the arteries), cardiovascular disease (e.g. coronary heart disease, myocardial infarction), cerebrovascular disease (cerebral infarction, cerebral hemorrhage). A large number of ketones will be produced due to the breakdown of fat, to lead to ketoacidosis (acidosis accompanied by the accumulation of ketone bodies in the body) and coma (unconsciousness).

Protein metabolism: Insulin plays an important role on protein formation, and also encourages cells uptake of amino acids. In other words, the insulin is one of essential hormones for the growth of body.

The enzyme-producing part of the pancreas is called the exocrine section. This part of the gland works closely with the liver and gall bladder, both of which secrete substances that are important for digestion of food.

If the pancreas exocrine function is insufficient, for example, lack of pancreatic juice, it will affect the digestion and absorption of fat and protein, so as to cause chronic diarrhea, vitamin deficiency and malnutrition.

The endocrine part of pancreas – pancreas islet – produces chemical substances (hormones) that go into the bloodstream to reach other organs whose functioning they affect.

Hormones are chemical substances secreted directly into the bloodstream. Together with the nervous system, coordinates and controls the hormonal function of the body’s various tissues and organs so that they work together in an appropriate, effective and accurate way.

The hormone-producing part of the pancreas is called the endocrine section. These areas can be seen as “islands” of hormone-producing cells located in the enzyme-producing section which can be regarded as “sea”. Each island is called a Langerhans island. This island produces several types of hormones, and the two most important hormones are insulin and glucagon:

Insulin: Insulin facilitates the body’s absorption of sugar in the form of glucose (one of the most important form of energy of body); and simultaneously, converts glucose into glycogen and fat as reserve energy; And it also promotes the formation and storage of fat and protein.

What is pancreatic juice?

Pancreatic juice contains: water and electrolytes – HCO3–, others like Na+, K+, Ca2+, Mg2+, HPO42+, and a variety of digestive enzymes.

Pancreatic amylase is a major digestive enzyme, which can hydrolyze starch into simpler sugars, like maltose and glucose, for absorption. The sugar is the most important source of energy supply.

Pancreatic amylase can break down the raw and cooked starches with high efficiency and speed. In the small intestine, the entire hydrolysis process will be completed within 10 minutes, since the pancreatic amylase and starch contact with each other.

Even if the pancreatic amylase is insufficient, sugar digestion and absorption are both not affected. That is because the saliva containing salivary amylase can also digest starch into sugar.

These starch-rich foods include:

Starchy foods can inhibit colorectal cancer. On the one hand, starchy foods can increase the stool, promote bowel movement, and hence accelerate the carcinogenic metabolites excreted. On the other hand, starch in the intestines will produce large amounts of butyrate, which is an effective inhibitor for colon cancer cell growth, as well as against bacterial growth in large intestine.

What is pancreatic lipase?

Pancreatic lipase is a main digestive enzymes to digest fat. That can hydrolyze triglycerides, the most important fat molecule, into glycerol, glycerol esters, fatty acids.

If lack of pancreatic lipase, dietary fat can not be digested and absorbed, so that the steatorrhea (excess fat in feces) occurs. That is often caused when getting a pancreatitis. In this case, the pancreas can not produce the sufficient pancreatic lipase.

Steatorrhea refers to the discharge of excess fat in the stool, also known as ‘small bowel malabsorption’. This diarrhea may be caused by:

What is pancreatic trypsin?

The pancreatic trypsin and chymotrypsin are both the main digestive enzymes to digest protein from food.

In fact, initially, the trypsin and chymotrypsin are inactive, called trypsinogen and chymotrypsinogen, which are produced and released by pancreas. These zymogens are inactive and so can not break down proteins. It can prevent enzymes from breaking down the pancreatic tissue itself directly – self-digestion. Subsequently, pancreatic juice passes from the pancreatic ducts to the small intestine to help digest food. In the small intestine, pancreatic juice mixes with intestinal juice, so that the trypsinogen is activated to form trypsin, which break down the proteins into small molecules of nutrients (e.g. peptides and amino acids.) for successful absorption.

If lack of pancreatic trypsin and chymotrypsin, or their activator – enterokinase, the proteins can not be digested and absorbed. As a result, the body will lack the very important component – protein.

In addition, pancreatic juice also contains pancreatic trypsin inhibitory factor, which can prevent a small part of the self-activation of trypsin digestion from digesting the pancreas.

In addition, pancreatic juice also contains trypsin inhibitors, that can prevent trypsinogen from being activated within the pancreas, thus avoiding the occurrence of pancreatitis.

The pancreatic juice contains a large amount of HCO3–, that can protect your intestinal wall from being destroyed by stomach acid. It is a so-called acid-base neutralization reaction, and therefore provides the best working environment (alkaline environment, Ph 7.5~8.5) for digestive enzymes to digest food. These pancreatic enzymes contained in pancreatic juice play an important role to break down fat, protein and starch for nutrient absorption.

In some children and young people, the production of insulin stops. They get high blood sugar and can be life-threatening illness. These have type 1 diabetes, and they must be treated with insulin given in the injection form, as injections.

A person who eats a lot of carbohydrate foods, will be able to “wear out” beta cells in the pancreas after a while (after a time). Amyloid protein produced along with the insulin namely amylin. Amylin can build up (accumulate) and form fibrils, so that beta cells may enter into apoptosis (programmed cell death). This may be a reason why beta cells of people with type 2 diabetes are unable to produce enough insulin, and glucose levels will thus not be lowered sufficiently. The insulin produced in people with type 2 diabetes, also has less effect on cells than normal. We say that they have insulin resistance.

beta-cell: a type of basophilic cell that makes up most of the bulk of the islets of Langerhans and secretes insulin.

Overweight people often produce insulin which works badly. We say that there is insulin resistance. Obese people may increase the production of insulin to compensate for the bad effects of insulin. This prevents the blood sugar becomes too high. Over time, however, this over-stimulation of the pancreas may lead to a gradual destruction of the cells that produce insulin. This increases the risk that the overweight will eventually develop type 2 diabetes.

Type-2-Diabetes occurs mostly due to a so-called insulin resistance, which means your body’s cells with a reduced sensitivity to insulin, so that the insulin can not play the role of lowering blood sugar. A disturbed insulin secretion and previous overproduction of insulin causing an existing exhaustion of the insulin-producing cells are both responsible for type-2-Diabetes. This diabetes is the most common form, that makes up approx. 93.5 percent ratio and mostly occurs in adults. Obviously, type 2 diabetes frequently involves obese population and families, which indicate the risk factors related to familial predisposition and dietary habits.

Insulin is a hormone in the body that can lower blood sugar levels and is produced in pancreas. From the pathogenesis, any cause leading to a malfunction in insulin production or function, will trigger diabetes. In the etiology, genetic, autoimmune, environmental and dietary factors, are related to diabetes. There are four types of diabetes and many causes are responsible for them.

In type 1 diabetes, the body’s own defense destroys the insulin-producing cells (B cell) of the pancreas. The insulin production decreases and will be finally completely shutdown. Why the body forms these antibodies is unclear. Heredity and genetic factors appear to play a role to start autoimmune response. As a result of immune destruction, B-cell function and number are both reduced, then insulin is elevated and diabetes occurs.

In type 2 diabetes, the sensitivity of the body’s cells is reduced for insulin, that is called insulin resistance. The cells of person affected needs a lot more insulin to absorb glucose from the blood, than cells of healthy humans. The insulin-producing cells of the pancreas pour out more insulin. Over time, they are overloaded, thereby the reduction of insulin production is gradually increased.

Trigger of diabetes is also related to hereditary or genetic factor; Environmental factors are also important causes to trigger type 2 diabetes, including aging, nutritional factors, obesity, lack of exercise, urbanization, stress, and fetal undernutrition. In addition, there are drugs that interfere with the metabolism of sugar, and diabetes can be caused, such as diabetogenic drugs. It is very common that the type 2 diabetes occurs in connection with the metabolic syndrome (including diabetes, atherosclerosis-related cardiovascular disease, hypertension, dyslipidemia, visceral obesity).

In the course of development of diabetes, the patients experience a process from Phase I – high levels of insulin in the blood and/or insulin resistance, and abnormal insulin secretion, to Phase II – impaired glucose tolerance, to Phase III – diabetes.